Home
Sonic
Why You Should Try Sonic Adventure 2 Rom Gamecube?

Sonic adventure 2 ROM GameCube is a sequel of Sonic Adventure, and it is game played on a 3D platform, this game can be played by six players or characters. This game introduced two new playable characters Rouge the bat and Shadow the Hedgehog. The six characters are divided into two campaigns, i.e. Hero and Dark. Hero consists of Sonic, Knuckles the Echidna and Tails whereas Dark has Shadow the Hedgehog, Rouge the bat and Doctor Eggman. 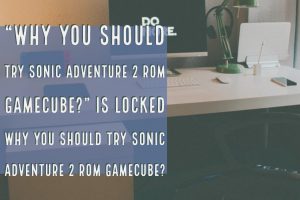 All the characters have their counterparts that belong to the opposite alignment, and they share a playstyle with their counterparts. The player can switch between the two campaigns by moving through them. Each campaign has levels according to the three characters it has.  The levels in the campaign are very exciting with various themes like cities, desert pyramids, jungles, and outer space too. These levels also involve boss fights. The stories of the two campaigns Hero and the Dark takes place in parallel; you will unlock the Last story that includes all the six characters only after completing both the campaigns

Sonic adventure 2 rom Gamecube has the health system for the player. There are rings scattered around through different levels; this ring has a great benefit. If a player is holding this ring while an enemy hit him, he will drop all of these rings whereas if he does not possess any ring and is hit by the enemy, he will lose a life. The characters Tails and Eggman possess a health bar which is refilled upon collection of rings. If you die and have no life left, that means the game is over. New abilities are granted to the characters if they get a permanent upgrade. Each level in this game has five missions; in the first mission, you have to continue the campaign, and in other missions, you have to complete difficult levels and collect 100 rings. The player can collect emblems; sonic adventure 2 ROM GameCube has 180 emblems. If the player collects the entire emblem, then he could be able to unlock the 3D version of an amazing stage named as Green Hill Zone. Sonic adventure 2 ROM GameCube has many 2-player modes.