Sonic CD, often referred to as Sonic the Hedgehog CD is a 1993 platform game initially available only on consoles. The PC only sonic cd rom version was made available in 1996. It was conceived as a ported version of Sonic the Hedgehog 2 but the idea was canceled after the previous game Sonic 2 failed to perform. 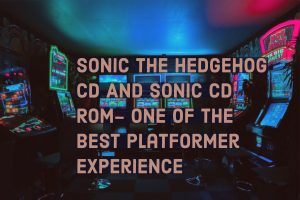 Often hailed as one of the best games in the Sonic franchise, it was praised by critics and audience alike for its size, ambition and surprisingly deep use of time travel. It officially introduced two of the most iconic characters in the franchise, had a unique design and gameplay which gave the franchise an identity which it struggled to gain before.

Sonic CD introduces a new element into the franchise, the time travel mechanism. It was unlike another Sonic game as it strengthened the gameplay, doubled down the levels, world exploration with the added feature of time travel allowing the player to repeat and access different versions of stages at different points of time. The seven different levels in the game featured the three time periods- the past, the present and the future( which itself had two different versions). The original features in the first game are reused such as spin dash, rolling into a ball and collecting rings to generate health.

Sonic CD introduced the two of the most iconic characters in Sonic franchise, Amy Rose and Metal Sonic. Amy Rose was intended as a love interest of Sonic while Metal Sonic was an evil version of Sonic acting as his strongest rival up to that point.

The time travel feature was supposedly inspired by Back to the Future. Four different variants of each stage were created, one for each time period( a past, a present and two futures).

The sonic cd rom size was 21 megabytes, an increase of 20 megabytes since Sonic 2.

Sonic CD was initially released only on Mega-CD platform on 23 September 1993 in Japan and on PC in August 1996. Sonic CD was later remastered in 2009, with certain enhancements related to graphics and gameplay. Original stages were developed but were left out in order to keep the essence of the original alive.

Sonic CD was widely praised by critics and general audience calling it the best game in the franchise at the time. Despite critical acclaim and selling over a million copies, it was played less than Sonic 2 due to the high price of the game and its platform. The PC version is considered to be inferior to the Mega-CD version.

Sonic CD was later adapted in various comics and books.