Some of the previous versions of the game are

What are the Features? 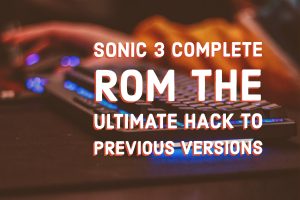 One of the important elements is that before the appearance of the original title screen appears, a menu is displayed letting the users select their desired game between Sonic & Knuckles, Blue Sphere, and Sonic 3 Complete Rom. Feature of changing the configuration of the game is also provided. The “beta” palette of the respective Flying Battery’s section is available to be put in its place. This feature is very similar to Sonic 3 feature of the save icon. Presence of a normal and easy mode is an extra perk.

Unlike earlier, tails have a sequence devoted to continuing screen, introduction sequence, etc. Super Sonic has recently added all new set of sprites based on Sonic Classic Heroes. Also, knuckles now boast of consistent as well as improved underwater colours.

Super Knuckles, Super Tails and Hyper Sonic have recently added underwater pallete. Sonic three demo sequence is the same and has been adopted from The Mushroom Valley demo. Unlike earlier, the intro of Sonics Angel Island can easily be skipped just with the help of a button. To continue, the players are now required to go on and collect about 50 rings.  These rings are required to be collected in the stage of slot machine bonus stage. The recent version has recently added a HUD to show progress. A new font for credits has been designed for giving a refined look to the title card. “THE DOOMSDAY”, as well as “DEATH EGG” cheats, have been altered to “DOOMSDAY” and “DEATH EGG” and “DOOMSDAY”.